Following the instructions which came with the olive, pomegranate and myrtle seeds, I put them into the soil today. Well, the pomegranate seeds not into, because they apparently need light for germination.

I used some plastic filing strips to make plantlabels so I know which is which and when I sew it.

The olive seeds are supposed to germinate within 4 to 12 weeks, the pomegranate seeds within 2 to 3 weeks and the myrtle within 2 to 5 weeks. This is only the batch from the starter set; I haven’t sown the collected olive seeds from Turkey yet. They all need temperatures between 20 and 25°C. I do hope that I can maintain that warmth in my window sill. I found an old outdoors thermometer, but I’m not sure it is working properly. That goes unto my shopping list.
And this is what my mini green house looks like tonight (without the roof/ lid):

By the way, the twig from Priene has already lost four leaves. I’m quite sure it won’t make it.

I looked over my holiday photographs again and I kind of found where I took the twig from Priene:

See the red arrow in the left? That’s where I snatched the twig. Nice view, huh?

And here’s a picture of the view the olive tree in Pergamon has, where I found the three seeds. You can see some branches of it.

That’s the best I can do. Sorry.

This October, I spent 12 days in Turkey with two friends exploring the Aegean coast and especially the ancient sites. I wanted to bring souvenirs, but as taking potsherds and fossils isn’t allowed, I collected some seeds instead.

From the beach in Gümüşlük, I got three olive seeds, another three from the Asklepeion in Pergamon, an acorn from Troy (more about that one later), a chestnut and some seeds of a fruit, but I don’t know which, from Kaplan Köyu (or Kaplan Villages). I also took an olive twig from near the Temple of Athena in Priene.
The olive seeds I put in my purse, but the other seeds into a plastic bottle with water I could easily carry around with me.
When I arrived back home in Germany, I put all the seeds into water, carefully trying to remember, which olive seeds I got from where.

Two or three days ago, I ordered a Bonsai starter set on the internet.

It contains a mini green house, a book about Bonsai, several planters, soil, fertilizer substrate, three bonsai glazed bowls, 23 olive seeds, 33 dwarf pomegranate seeds and 32 myrtle seeds as well as some mimosa seeds (for marketing reasons). The seeds came with instructions of their own and I followed those. It said to water the seeds (with the olive seeds previously having been treated with sand paper) in room-warm water for 12 hours/ overnight/ 24 hours.

It was 28 €, which I for now consider a very good price. We’ll see how many seeds actually germinate…

Because I considered the acorn and chestnut to be watered sufficiently after at least a week, I already put them into water. It says in the book that acorns should hibernate in sand, but it had already broken its shell when I picked it up in Troy, so I didn’t follow that instruction. Fingers crossed!

I put all seeds into the mini greenhouse and put them under surveillance: 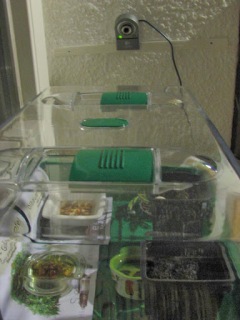 I attached a webcam to the wall, so it can take pictures every 12 hours (for now). Problem is that it needs to be connected to the laptop at all times, which rather limits my range of my using the laptop. I have thought about getting a Raspberry Pi solution, but that would be another project altogether, because my “programming skills” are limited to HTML and CSS.