Last November, I cut a twig from a willow tree near my house, put it into water and waited for the roots to grow. They did after a while and so I planted it and from time to time cut it to make it into a nice bonsai. I wouldn’t call it a proper bonsai tree yet, but I like how it has turned out so far. 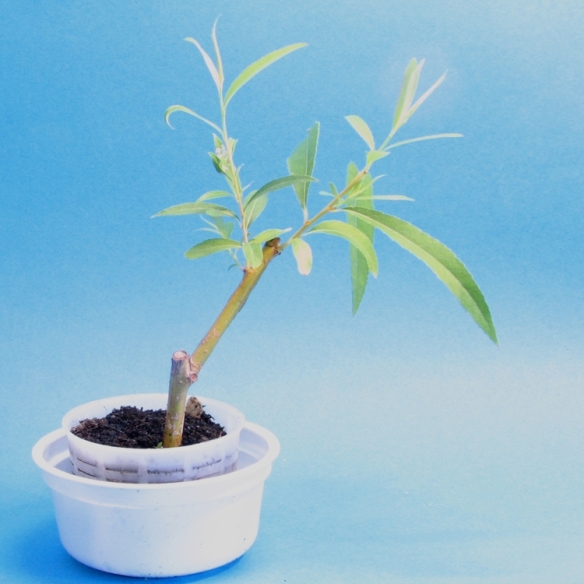 I think willow trees are a good way to start into bonsai. They grow quickly and they are easy to maintain. (My five year old avocado tree died, by the way and my bought olive tree might be dead, too.)

This is the only tree I haven’t grown from seeds.

Here is a HD video of the bee nesting in my IVAR bonsai nursery shelf on the balcony:

It is now working on the third hole and I have put four more of these metal thingies in where I want to add another shelf later. It seems I have to book in early. 😀

I stopped the time-lapse project today, because the seedling was growing too tall and anyway, there was only waving about since the last couple of days. See for yourselves:

This time, I left the light on during the night (except for the first night). So, whenever you see a yellowish light, that’s night. There’s almost a complete day missing, because…now, let me think…it stopped recording and I hadn’t set my calender or something.

I used the Raspberry Pi Camera and the raspistill function again. One picture every 20 minutes this time.

I have stopped taking pictures of the growing Ginkgo seedling today, because I had to start a new project and because the seedling is already too tall for the image section.

Here’s the result of four weeks surveillance (I deleted the night pictures to reduce the flickering):

I somehow managed to disable my RPi camera yesterday, so it couldn’t take any more pictures.

It seems to work again, now, so I will continue taking those pictures after all, but there will be a day missing.

After about four weeks of taking a picture every hour, I’ve compiled a timelapse video of some of my lemon tree seedlings.

There were eight seeds in the pot and I’m happy to announce that all of them have germinated. The last one only today, when stopped taking the pictures, so it isn’t visible in the video.

I will repot some of them (the taller ones) tomorrow.

The pictures where taken with the Raspberry Pi and RPi Camera Module. The code used was

.
The “-t” value might have been a bit different. I used VirtualDub to render it as a video and Magix to edit the video.

Over the past 12 days, I had one photograph per hour of my pomegranate seedlings/ germlings. The quality is not that great, because it has been two quite dark weeks with hardly any sun, but see for yourselves:

Punica granatum nana from TimeLapsus on Vimeo.
The first two pots contain the pomegranates, the one in the back is myrtle. Six out of 31 seeds have germinated. I do hope that I can get at least three to become saplings.
I have just felled the three in the front pot and hope they will survive that. Their roots went down to the bottom of the pot and I might have hurt them.

I had gotten this pine cone last Saturday and it said on the label that one should put it in a warm place and that it would open after a few weeks. I did that and it started opening the next day, so I thought that I could make a timelapse video of it opening. It didn’t work that well, because it didn’t want to open as quickly as I had anticipated. And I didn’t want to leave my laptop on for several days. So I stopped recording after 11 hours when I went to work. Then, when I returned, it had opened even more. I had anticipated THAT, but anyway, I started recording again. This time, the camera made the laptop crash after 5 hours. So, the results aren’t that great. See for yourselves:

The quality isn’t that great either, because opening the preview in fullscreen would also crash the laptop, so I refrained from that.
(I used a Logitech Webcam with Timershot for the capture, FastStone Image Viewer for re-sizing and for the time stamps and VirtualDub again for converting the photographs into the videos.)

And here is a picture of the opened pine cone and some of its pine nuts: